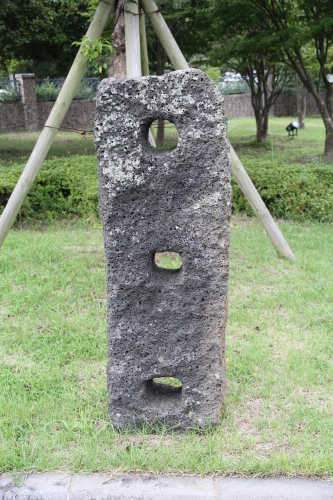 In Jeju, Jeongjuseok possessing 2-4 holes and Jeongnang, a 2m-long wooden bar, used to serve as a front gate for old thatched-roof houses. It could either indicate an absence of an owner of the house, or served as a barrier for preventing cows or horses from getting into the house. All Jeongnangs were set up when the owner was out for a long time or had left for farming, 1-2 of them were set up when the owner wished to indicate that they were visiting a neighbor, and none were up when the owner was home. One bar set up meant that the owner will not be home for a short time. Two bars set up meant that the owner will not come back for a long period of time. All three bars set up meant that he or she will not come back that day. The Jeongjuseok served as Olejigi (Guardian of Ole) and was also considered to be sacred in the popular belief of Jeju people.